Ban Mae Klang Luang (บานแม่กลางหลวง) is a S’gaw Karen village in Doi Inthanon National Park. It is a community of the White Karen people. The name of the village refers to the Klang River (Mae Klang) from which the community receives its drinking water. “Luang” means “big”. According to an information board at the Pha Dok Siew trail, Karen people had moved into this area since 1870. It also tells the story of how the Karen obtained the land on which they established four villages.

Prince Uttarakan Koson, Sukkasem na Chiengmai (Thai: เจ้าอุตรการโกศล (ศุขเกษม ณ เชียงใหม่))(1880-1913), was the owner of the land where the Karen people had settled. The Prince was the first son of the last ruler of Chiang Mai Prince Kaew Nawarat. At the time Prince Uttarakan Koson was the governor of Lamphun, so the story goes. In the early 20th century Karen people obtained the land from the prince in exchange for an elephant, which was called “Mo-tu-mae”. There is a statue of this elephant at The Buddhist Park in the village. Karen people established four villages on the land: Ban Mae Klang Luang, Ban Angka Noi, Ban Nong Lom, and Ban Phamon.

The first European visitor of the Karen villages

The German botanist Carl Curt Hosséus (1878-1950) was probably the first European to visit the Karen villages on the slopes of Doi Inthanon. In January 1905 he ascended Doi Inthanon and started at Chomthong. He followed the flow of the Mae Klang River and wrote: “On the left lay a host of terraced rice fields visible through the forest. A last curve and in front of us lies the village, characteristic for which is the close arrangement of the houses without any gardens”. It is not clear which village this was but it probaby was Ban Mae Klang Luang.

Hosséus meets the deputy chief of the village who tells him that he is first European to visit the village, which was established six years ago. The deputy chief also tells him that they grow rice, tobacco, melons, Chinese potatoes, cucumbers, Indian grain and red peppers. Hosséus wrote that the village consisted of twenty-two houses. Accompanied by five Karen villages as porters Hosséus starts the final ascent to the summit of the highest mountain of Siam.

They reached a peak at 2,570 meter altitude which Hosséus gives the name Richthofen Peak, after the German German traveller, geographer, and scientist Baron Ferdinand Freiherr von Richthofen (1833-1905). He also planted a German flag on this peak to more or less claim the mountain for his country. Hosséus only stayed one night on the peak of the mountain because he and his party were not prepared for the low temperatures. On the descent they took a different route via Muang Win.

The founding of the four villages

Taking all the available information into consideration the Karen people founded Ban Mae Klang Luang probably around the turn of the 19th century. I have not yet found any evidence that  Prince Uttarakan Koson was the owner of the land where the Karen people had settled. It seems unlikely he was the governor of Lamphun at such a young age. Remember he was born in 1880. I will do some more research. During my last visit villagers didn’t know anything about the founding of the villages. Someone suggested to somebody just made up a story, which is possible.

The May 1925 edition of the Journal of the Siam Society contains an article titled “Doi Angka”. The authors were the Irish doctor A.F.G.Kerr (1877-1942) and the British botanist Henry Burton Guest Garrett (1872-1959). It is a great article that describes several ascents of Doi Inthanon along the Muang Win and the Chomtong/Muang Kang routes. Kerr undertook the ascent in April-May 1921 from Chomthong. He followed the course of the Mae Klang River (“Mê Kãng”): “Soon after starting the main path along the Mê Kãng was left and a branch path to the right taken, this led to a fairly new Karen village, called Bãn Nawgn Long, conveniently situated for the last part of the ascent of Angkã.”

He continued: “To the West of Ban Nawng Lom is another and larger Karen village, known as Ban Pratu Muang, situated on the main branch of the Mê Kãng. This latter village is often known as Ban Kun Kang, the village of the headwaters of the Me Kang, and it was there that Hosseus went.” This description confirms that this village is probably Ban Mae Klang Luang. The pictures below show Karen people living at the foot of Doi Angka, taken by Garret and A.F.G.Kerr.

In 1999 Karen people from these four villages established a local organization called “Ban Mae Klang Luang Tourism Alliance” in 1999 in order to operate a community-based tourism. Their primary goals were to earn supplementary income, provide genuine knowledge about the Karen people, and rectify any misunderstanding among outsiders about the Karen people. Park authorities supported this initiative because there had been an increase in conflicts between national park officials and villagers as a result of illegal hunting for wild animals and forest encroachment.

The Thailand Research Fund (TRF), the Royal Project of Agricultural Extension and the National Park authority assisted with capacity building, guide training and study tours to establish community based tourism in the villages. They also established a network of village home stays.

I visited the village for the first time about ten years ago. At that time there were already several bungalows where tourists spent the night. It was the first evidence of emerging private enterprise. In 2014 I took a group from the Philippines, that was interested in developing community-based tourism, to Ban Mae Klang Luang. We also visited Ban Nong Lom and Ban Phamon, where a French company, named Thailande Autrement, had funded two homestays.

It is difficult to find statistics of the amount of visitors to the village over the past ten years. From my own observation I can see that there has been a steady growth of the number of Thai tourists to Ban Mae Klang Luang and Doi Inthanon National Park. In the months December and January many local tourists visit the park. Most of them come to hike the famous Kew Mae Pan Nature Trail and watch the sunrise and the “sea of clouds”.

In the last couple of years villagers have constructed more and more bungalows to accommodate the growing number of local tourists. Visitors don’t stay in home stays anymore but in comfortable rooms with private hot shower and toilet. I have seen the same development in Mae Kampong, which also started as a community-based tourism project more than 20 years ago. Some of the bungalows at Ban Mae Klang Luang are located in the middle of rice fields, offering nice views.

On a hill next to the village is a remarkable temple named the Mae Klang Luang Buddhist Park (Thai: พุทธอุทยานแม่กลางหลวง), according to the sign. There is a nice trail through the forest leading to this wonderful and exceptional temple. It starts close to the primary school in the village. You can also follow the road that is suitable for vehicles. There are several monks living in this temple. You have to pass through their living quarters and follow the trail that leads to the chedi, the viharn, and a sala that contains a sitting Buddha image.

The most eye-catching statue is that of a resting elephant with a Karen man sitting against it. This elephant is the animal, called “Mo-tu-mae” that villagers presented to the governor of Lamphun province before they established the village. This temple is highly unusual and very beautiful.

At least ten years ago villagers started developing a nature trail that descends along with the beautiful Pha Dok Siew Waterfall. This waterfall in the Klang River cascades down and has at least 10 steps of which only several can be visited. We hiked the trail about 10 years ago, then in 2018, and again in October 2020. People of the village maintain the trail and also are guides. This gives the villagers some extra income.

The Pha Dok Siew Nature Trail is really a fantastic trail. It starts up, near the park headquarters and takes you down to the village. It is not a circular trail. Most of the trail is down but it is not easy. Bring good shoes. Most people in reasonable shape should be able to do the trail in under two hours. You can read more in our article about Doi Inthanon Trekking and Hiking. 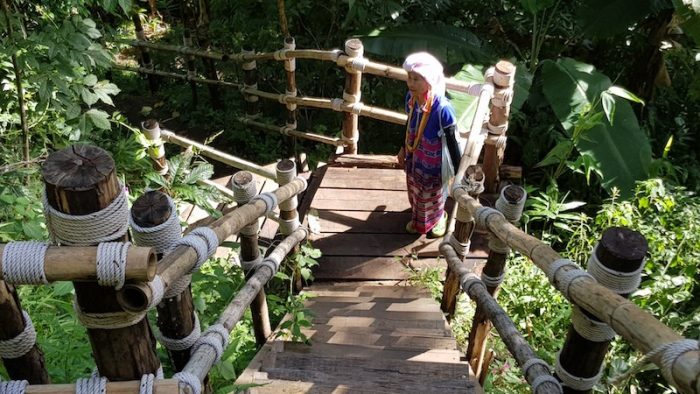 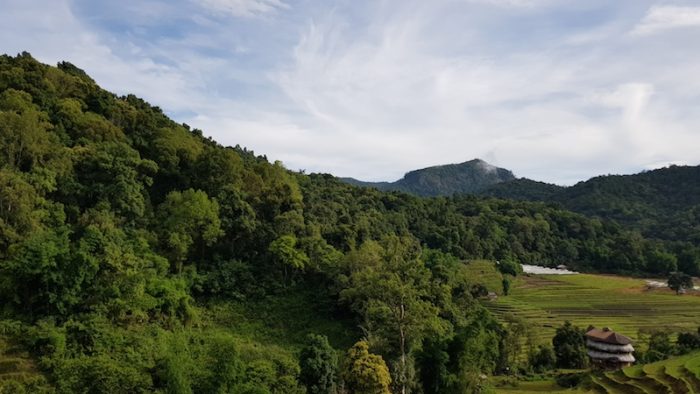 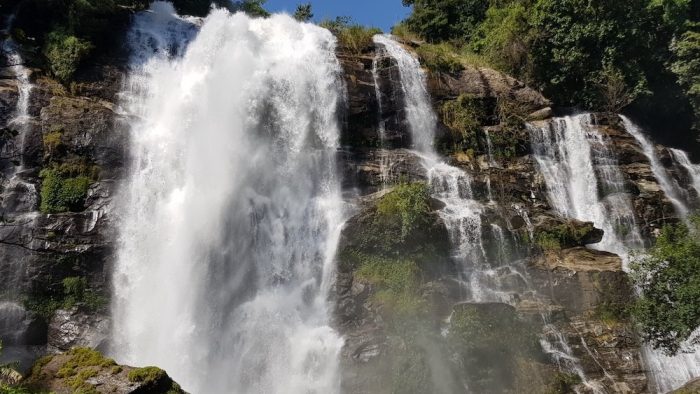 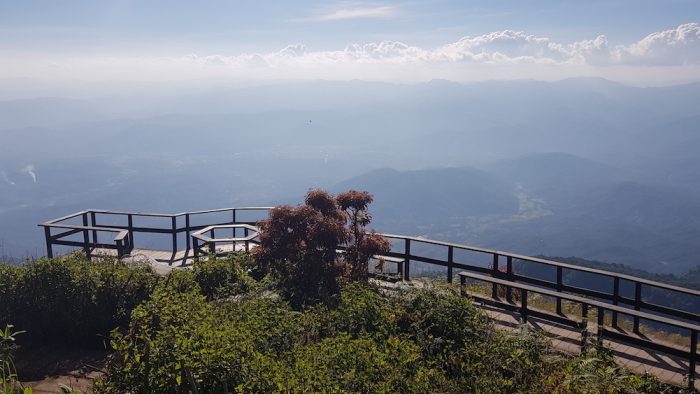 Recent Posts
Copyright 2022 © Green Trails
We use cookies on our website to give you the most relevant experience by remembering your preferences and repeat visits. By clicking “Accept All”, you consent to the use of ALL the cookies. However, you may visit "Cookie Settings" to provide a controlled consent.
Cookie SettingsAccept All
Manage consent