Doi Angkhang or Doi Ang Khang (Thai: ดอยอ่างขาง) is a mountain in Fang district, in the north of Chiang Mai province, close to the Thai-Myanmar border. The mountain is part of the Daen Lao Range (Thai: ทิวเขาแดนลาว), that stretches on the Myanmar side all the way to the Chinese border. The mountain is 1928 meters high and ranks 15th on the list of the highest peaks of Thailand.
Since 2019 Doi Angkhang and its surrounding area is part of the Doi Pha Hom Pok National Park. This inclusion has had profound consequences for Doi Angkhang as a tourist destination. This article is based largely on my own experiences and research on the spot. I am trying to find more information about the history of Doi Angkhang so I will update this post regularly.

The oldest reference I found about Doi Angkhang comes from a report by the British Consul-General in Chiang Mai Mr.H.Fitzmaurice, dated February 7, 1931. This is what he wrote in his report:

“Among matters which I have had to hold up for the return to office of either the Lord Lieutenant or the Governor is a request from the commissioner of the Shan States to bring to the attention of the local authorities the presence of a gang of dacoits at Doi Ma Ang Khang, near Muang Fang. The Borneo Company, too, are uneasy as to the activities of this gang, as they are working forests in the near vicinity of Doi Ma Ang Khang. It would be useless to discuss this with subordinates, for it is a difficult matter for the Siamese to deal with.

The presence of bad characters at Doi Ma Ang Khang has frequently been the subject of correspondence in the past, and, as Wood stated in his letter to Mr.Wingfield of October 2nd 1929, Phya Anubal practically admitted then that the authorities scarcely minded murders or other disorders in that wild region. Doi Ma Ang Khang is, incidentally one of the most notorious opium-growing regions in North-Siam, and any habitués who have money, if not dacoits, are probably dealers in illicit opium. I am not very hopeful of getting the Siamese here to do much, but it seems desirable to have a talk with the Lord Lieutenant or Phya Anubal before I write officially to you on the subject or reply to the Commissioner of the Federated Shan States.”

A wild and rugged border area

From the above report, it is clear that the area of Doi Angkhang was a wild and rugged area that was notorious for opium cultivation and banditry. By the way, “Wood” is W.A.R.Wood (1878-1970), who was the predecessor of Fitzmaurice as Consul-General at Chiang Mai. I have not been able to find out who Wingfield was. The Borneo Company had extensive teak forest concessions north of Chiang Dao and south of Fang.

I have not been able to find much yet about this area. In 1961, 30 years later, the troops of the 3rd Kuomintang (KMT) division crossed the border here and established settlements in this area. One of these settlements was Tham Ngob, which became the headquarters of the 3rd division under the leadership of General Li Wen Huan. The abandoned buildings are still there. They are a fortified main house, barracks, and other auxiliary buildings. Several years ago there was a small restaurant with old pictures on the wall, run by the daughter of General Li. On my last visit, there was no one at this place.

According to my information, there are nine communities on Doi Angkhang. Five of these are ethnic Chinese villages such as Baan Khum, Baan Luang, Baan Tham Ngob, Baan Sin Chai and Baan Pha Daeng. These Chinese are either descendant of the KMT troops that entered the area in 1961 or related to the Haw traders, whose caravans transported goods in the region, including opium.

There are two hill tribe villages on the mountain. Probably the oldest village is Baan Kob Dong, a Black Lahu community that might have moved into the area in the 1960s or even earlier. Pictures in the villages show a youthful King Bhumibol Adulyadej visiting the village and talking to villagers. The other village is Nor Lae, a Palong or Dara-Ang village, which is located right on the Thai-Myanmar border. These villagers crossed the border from Myanmar in the 1980s. Many Palong settled in Chiang Dao district, these people stayed right on the border. Both villages are worth a visit.

As we have seen from the report of consul Fitzmaurice the Doi Angkhang mountain range was already notorious for banditry, opium cultivation, and drug trade in the 1930s. I found different dates but most likely the establishment of the Angkhang Royal Agricultural Station started in 1979. After that the station grew into the largest Royal Project in the country, covering about 318 ha. You need a vehicle to visit this extensive station that experiments with growing many cash crops and flowers as substitutes for opium.

Peach, persimmon, Japanese apricot, kiwi, avocado, strawberry, Arabica coffee, Chinese tea, organic vegetable, roses, Calla Lilly flowers, potted plants, and Portobello mushrooms are some of these crops and flowers. The closure of the accommodation in Ban Khum in 2019 resulted in a significant drop in visitors to the project. This caused the project to release hundreds of its workforce, which was a very sad development.

Doi Angkhang as a tourist destination

Authorities developed the Royal Agricultural Station as a tourists destination with a restaurant and accommodation in the 1980s. In the 1995 edition of the guidebook Thailand: a Travel Survival Kit, writer Joe Cummings mentioned Doi Angkhang very briefly as the “Little Switzerland” of Thailand.

The Bangkok Post broke the news on April 4, 2019, that the resort was handed over to the Royal Agricultural Station Angkhang (RASA). To rehabilitate the ecosystem, RASA intended to demolish the resort with help of the military. When I visited in July of that year the resort had vanished from the face of the earth.

Where to stay now

The main community on the mountain is the Chinese village Ban Khum, where also the entrance is of the Royal Agricultural Station. There are a couple of small restaurants here. Ban Khum was also the location of several guesthouses and the only hotel, the Angkhang Nature Resort. As far as I know, all these accommodations had to close after Doi Angkhang became part of the Doi Pahom Pok National Park in 2019.

Consequently, they demolished the Angkhang Nature Resort. Nothing is left of this accommodation apart from the driveway and the pathways between the bungalows. If you want to spend the night the only option is organized camping at two places. In October 2019 I stayed at the main camping site which is a couple of km from Ban Khum. You rent a tent for the night at a beautiful viewpoint next to a huge parking lot. There is a park headquarters building and a coffee shop. The tents are very close to a large view deck from where you can observe the sea of clouds around sunrise.

The other camping site is opposite the Sui Thang viewpoint where also the ticket booth is.

As mentioned Doi Angkhang has become part of the Doi Pha Hom Pok National Park in 2019. Since then Doi Angkhang has, like all national parks in Thailand, an entrance fee. There is a ticket booth opposite the Sui Thang viewpoint but the entrance seems to be only for people who spend the night in the park. As far as I could see the other entry point of the park is at the other camping site near Ban Khum. I made the below picture of the entrance fees and overnight prices at the office there.

You can therefore still visit Doi Angkhang on a drive-through basis and visit the Royal Project as well as the two interesting hill tribe villages.

How to get there

There is no public transportation available to Doi Angkhang so you will need a private vehicle to take you there. There are two ways to get to the mountain: if you come from Chiang Mai you should drive to Chiang Dao, take road 1178 to the Wiang Haeng intersection, and continue to the Baan Arunothai and the Myanmar border along road 1340. Continue to Doi Angkhang via the Chinese villages Sinchai, Tham Ngob, and Pa Daeng. I really enjoy driving this road.

Another way is to take road 1249 from Fang district. This is a shorter but very steep route with hairpins. This road can be tricky, especially when it rains. Views are fantastic. I prefer to drive this road down instead of up. The last time I drove this road I was held up for half an hour because of an accident with a minivan. Driving to and on Doi Angkhang can be very tricky and dangerous. The roads are narrow and winding so you should have some driving experience in Thailand before you go there.

I have visited Doi Angkhang at least five times in the past ten years. I enjoy the drive from Chiang Dao to Arunothai and onwards to Doi Angkhang. It is a beautiful and quiet road which gives you the feeling of remoteness. The scenery is absolutely stunning.
Wikipedia gives some good general information about Doi Angkhang.
Consular Report by H.Fitzmaurice, Chiang Mai, 1931. I found this report in the British Library in London.

We feature the mountain in two of our expeditions: The Ancient Caravan Trail to Chiang Rai and The Explore North Thailand Tour. 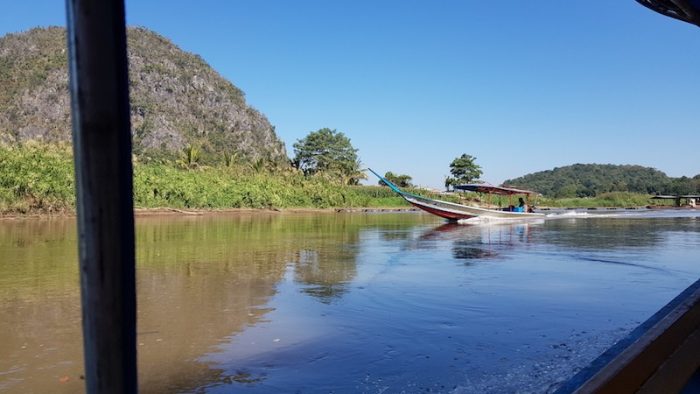