The Akha people - History and Culture​

The Akha people in Thailand

Origins of the Akha people

The Akha hill tribe originated in Yunnan in Southern China. Yunnan still has the highest Akha population. Over several centuries many Akha people have been migrating southward from their original home. In the middle of the 19th century, significant numbers were moving into Shan State in Burma. Others made their way into Laos. Most of the Akha in Thailand came from Burma. The first Akha hill tribe village in Thailand was probably established in 1903 in the Phaya Phrai area on the Burmese border. Phaya Phrai is in Mae Fah Luang District, Chiang Rai.

Donna Bramhall of Haute Culture Fashion Textile Tours made this video for us:

Where do the Akha people live?

The Akha hill tribe people live in China, Myanmar, Thailand, Laos, and Vietnam. In China, they mostly live in Yunnan province. In Myanmar, you will find Akha villages in Shan State. They live in North Thailand. In Laos, they live in the border areas of China and Thailand. In Vietnam, they are a tiny minority living in the northwest border area.

Chiang Rai province is home to most Akha villages in Thailand. An area with a large percentage of Akha hill tribe people is Mae Salong (now known as Santikhiri), northwest of Chiang Rai. Many Akha hill tribe villages are also near Ban Therd Thai (formerly known as Ban Hin Taek), a former residence and base of the so-called “Opium King,” Khun Sa.There are some Akha villages in Viang Pa Pao and Chiang Dao districts, but the majority of the Akha people have never moved south of the Mae Kok River.

There are three subgroups of the Akha hill tribe in Thailand: Akha Loi Mi, Akha Phami, and Akha U Lo. The Loi Mi are easily recognizable by the distinctive metal plate on the woman’s headdress’s back. The U Lo women wear a conical headdress. From our observation: there seem to be more Akha Loi Mi and U Lo than Akha Phami. The three subgroups speak the same language.

The Akha hill tribe speak a language in the Lolo/Yi branch of the Tibeto-Burman language group. The Akha have no traditional written language. There are a variety of schemes for writing Akha. These have been developed by missionaries or linguists who use Roman, Thai or Burmese characters. Apparently literacy in Akha is still virtually non-existent. We have listed a number of expressions and words that you can use if you visit an Akha village.

An Akha Lomi woman from Ban Apha, Chiang Rai province, tells us how to count from 1 to 10 in Akha language. Now you can practice yourself.

Though many Akha, especially younger people, are Christian, Akha Zang (“The Akha Way”), a total lifestyle prescribed in the Akha people’s oral literature, still runs deep in the consciousness of older generations. The Akha Way combines animism, ancestor worship, and their deep relationship with the land.

For an Akha, the Akha Way is a way of life that extends beyond simple religious practice and infuses every aspect of their existence. The Akha Way emphasizes rituals in everyday life and stresses strong family ties. Every Akha male can recount his genealogy back over fifty generations to the first Akha.

The Akha hill tribe people generally live in bamboo houses raised on low wooden stilts in hilly areas. These huts are divided by gender. One side is for the women. The other side, occupied by the men, is used as a more public area. Especially in remote areas in Mae Fah Luang district in Chiang Rai province, you will still find original Akha houses. They are harder and harder to find, though.

The Akha subsist through an often destructive form of slash-and-burn agriculture. It resulted in the elimination of old-growth forests, native animal species, and serious soil runoff problems. The Thai government has made considerable efforts to ban slash-and-burn practices as much as possible.

They are expert farmers who focus on mountain rice, corn, and soybeans, planted in seasonal shifts. The Akha are also very efficient hunters, though their prey sometimes includes endangered species. Some Akha grew opium for income in the past.

The most famous festival of the Akha is the swing festival. This festival takes place at the peak of the rainy season, which is the end of August or September. If you are in North Thailand around that time, it is worth considering a visit.

There are several other tribal festivals in which the Akha participate. In November, a tribal festival usually takes place at Hua Mae Kham, Mae Fah Luang district. In early December last year, I visited a tribal festival in Mae Sai in which Akha Phami, Palaung (Dara-ang), Tai Ya, Tai Lue, and other tribes took part. We will keep you updated.

In March 2019, the British tour operator Hayes and Jarvis contacted us. We organized an Akha cooking demonstration in the village Ban Apha for the magazine Food & Travel at their request. Journalist Philip Sweeney and photographer Gary Latham traveled to the village. Our guide Narong was responsible for making this a great success in cooperation with Armue and his wife. The magazine never credited Green Trails for this, and the tour operator took no responsibility. The pictures Gary took are great, though. You can find more on his website.

We organize this cooking demonstration on request, and it is really a great thing to do.

This website contains a lot of exciting information on the Akha. 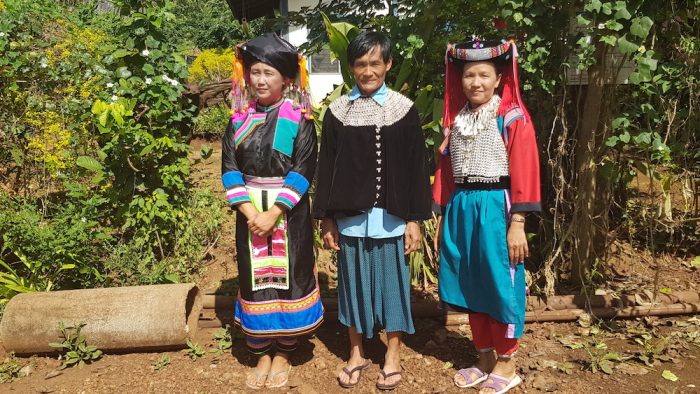