Origins of the Yao Hill Tribe

The Yao hill tribe originally come from Southern China. They also call themselves “Mien”. From the late 1800s to the early 19th century, the Yao started migrated into Myanmar, Thailand, Vietnam and Laos.

In Thailand Mien or Yao hill tribe communities can be found in Chiang Rai, Phayao, Nan, Lampang, Chiang Mai, Phitsanulok and Kamphaeng Phet provinces. Most likely you will meet them in Chiang Rai province. In Vietnam, they are called “Zao”. There are Red and Black Zao in Vietnam. Just like the Hmong People the Yao supported the American cause during the Laotian civil war in the 1960s and 70s. After the war the Pathet Lao regime started to persecute the Yao people. Consequently many of them sought refuge in Thailand and ultimately some of them were able to re-settle in the United States. Most of them live on the West Coast.

There are various subgroups among the Yao. The Lanten is an important subgroup. They are also known as the “Indigo Yao”. You can find Lanten communities in Laos, not in Thailand

The Yao hill tribe people have no written script and use Chinese characters. Several languages are spoken according to the various subgroups. Here are some useful words in the Yao language.

Wom (as in woman)

A Mien (Yao) woman from Huaysai village, Chiang Rai, tell us how to count from 1 to 10 in her language:

The Yao hill tribe people in Thailand are primarily Buddhists. Most of them have mixed elements of Buddhism with their traditional animistic beliefs. Animism encompasses the beliefs that there is no separation between the spiritual and physical (or material) world. Animists believe that souls or spirits exist, not only in humans, but also in animals, plants, rocks, geographic features such as mountains or rivers, or other entities of the natural environment. Animists often seek help through supernatural spirits and objects.

The Yao prefer high altitude dwellings. Their homes are usually built on solid ground. In a traditional Yao home, you will find a communal living area, a few bedrooms, and a guest area. I remember from personal experience  three Yao villages on a mountain top in Chiang Rai province. We had a great view and could see the lights of the city Chiang Rai after dark.

The Yao typically grow corn and rice as their primary crops, though they are known to grow other crops as well. The Yao adapted to Thai agriculture and learning to produce a variety of new vegetables with each passing year. Opium cultivation is still relevant in some sections of Yao culture, though the tradition is on the decline. In the early 1990s the cultivation of opium was still a problem in Northern Thailand. In the three Yao villages there was a presence of Thai border police to control the situation.

The traditional attire of the Yao hill tribe people is extraordinarily beautiful. The women wear long black jackets with scarlet woollen lapels. In addition to this, they wear loose black pants that embroidered with exquisite designs and a matching black turban. The Yao beautifullly dress up their children. Yao babies commonly wear intricately embroidered caps. Men wear loose jackets with embroidered pockets and trim. Jewellery is fashionable in Yao culture as well.

During special events women and children often wear silver neck rings along with an intricate set of chains and ornaments, the silversmiths of the Yao hill tribe are renowned throughout Thailand for their impressive skill. The women are known for their rich embroidery and cross-stitch. The intricate designs are unique facets to the clothing of each member of the Yao family. The Yao are also known for producing exquisite silver pieces. These skills account for a large part of their economy. 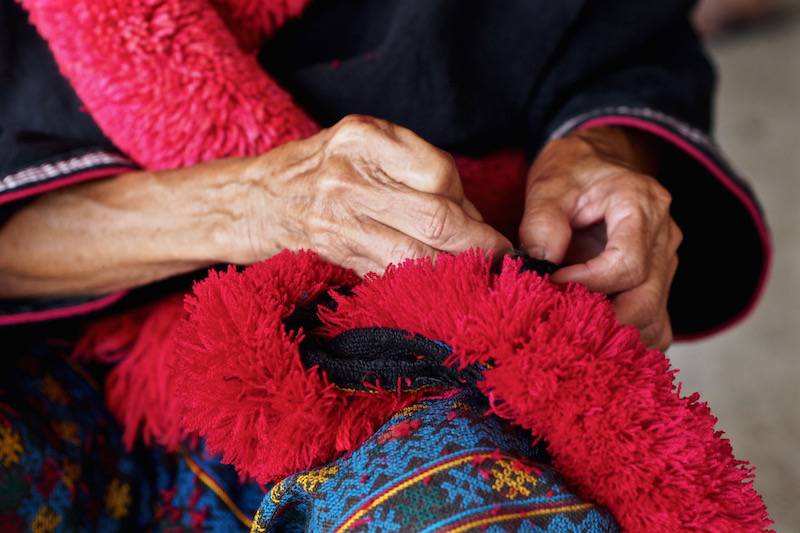 The most important festival of the Yao hill tribe people is that of New Year. It falls on the same date as the Chinese New Year. More on the Yao New Year here. 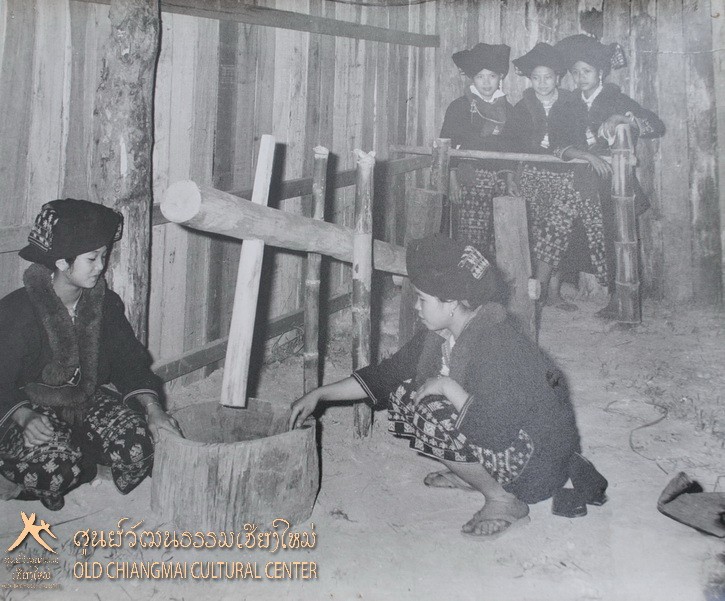 At this moment we don’t have a standard tour that features a visit to a Yao village. We have succesfully operated  tours to Yao communities, focusing on tribal textiles. During this tour guests would learn to make a Yao collar, so specific for this ethnic group.