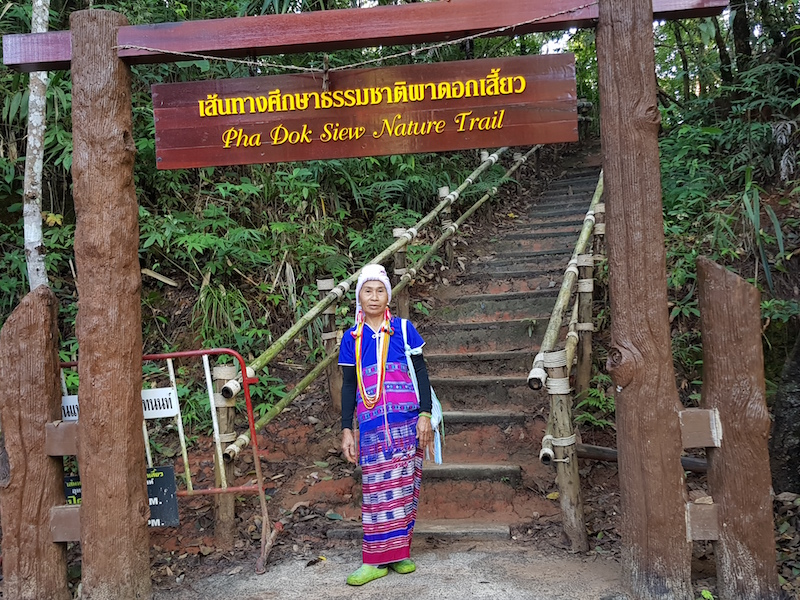 The Pha Dok Siew Nature Trail is one of the two nature trails in Doi Inthanon National Park under management of local people.The other trail is the Kew Mae Pan Nature Trail which is under management of the Hmong people. The Karen people of the village Baan Mae Klang Luang manage the trail and also work as guides. I have done the trail recently twice. It had been about two years since I had last hiked this trail and there were quite a few changes. The Karen people have received a grant to improve the trail on the occasion of the coronation of King Rama X. They have used bamboo to build bridges, stairs and railings to improve the safety of the trail near the waterfall.

With help of Chiang Mai University they have placed boards along the trail with general information and info about plants, flowers and trees. I was pleasantly surprised. At the entrance there is a gate and an information board with a map of the trail. There is now also a shelter where the guides are waiting. Overall it looks a lot much more professional than it was. By the way, the trail is named after a rocky cliff we pass along the way. “Pha” means cliff. The cliff has been named the “Dok Siew”. The Dok Siew is a flower we know as Bauhinia Variegata, also known as the Orchid Tree.

The hike to the waterfall

Taking a guide along is compulsory. The trail is clearly marked but guiding gives the people some extra income. Apart from that it is really nice to have someone coming along. The first time in September I was alone. Some of the guides speak a little English but most of them don’t. My Thai is reasonable so I could talk with my female guide who was 65 years old. She is in great shape and was fun to be with. The guides are not professional at all but have a lot of knowledge of the forest. You have to ask otherwise they only walk in front.

The hike is fairly easy in the beginning. The trail goes down through the forest with lots of pine trees such as the Pinus Kesiya. There are  boards with information along the trail. Along steps you will go down to the waterfall. You will pass greenhouses with marigold flowers. I could not remember seeing these the last time I hiked the trail. These yellow flowers are used to worship the Buddha. I had the impression they had changed the route of the trail as well. 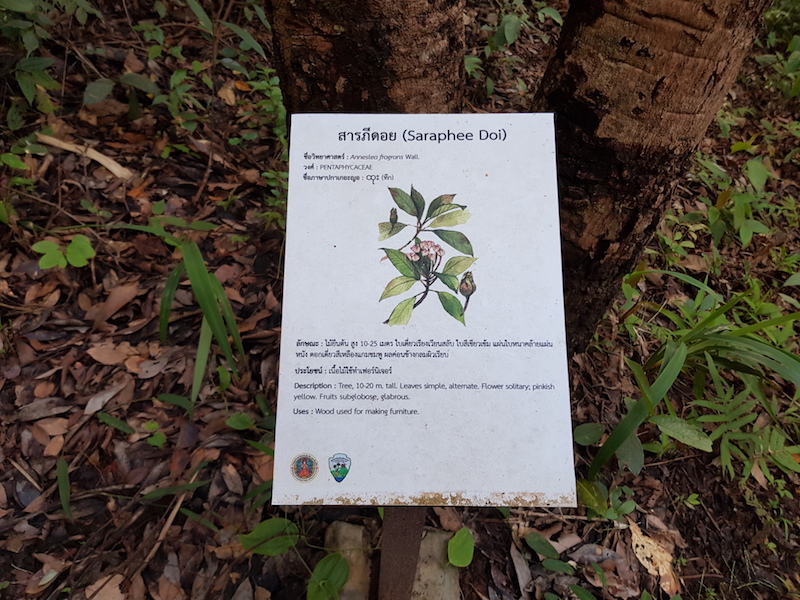 The Pha Dok Siew Waterfall has many steps of which only a few are accessible. The waterfall is in fact the Mae Klang River that cascades down via several waterfalls in the Doi Inthanon National Park. The source of this river is in the forest higher up the mountain. The river cascades down to the Ping River, which it joins such south of Chomthong. It features many popular waterfalls such as the Mae Klang, Pha Dok Siew, Wachirathan (or Vachirathan) and Sirithan waterfalls. The main road no.1009 runs parallel to this river until Ban Khun Klang.

This was also the route taken by the early expeditions of foreign botanists such as the German Carl Curt Hosseus and A.F.G.Kerr, the “father of Thai botany”. By bamboo stairs and bridges you walk along the waterfall and across the river. The falls are really magnificent. Beware though: swimming is not allowed at any place during this hike. It is just too dangerous.

After we have left the falls behind the trail becomes easier and less steep. It is a relaxed hike along a little irrigation canal. You will have some nice views of forested mountains and rice terraces. We will also pass the Dok Siew Cliff, that has given the name to the waterfall and the trail. According to the Karen people there are two families of white-handed gibbons living not far from the trail. I have never seen them or heard the call of the gibbon. I know that, in general, the Karen people are more aware of and active in wildlife conservation that other groups. According to reports of botanists such as Hosseus and Kerr there was a lot of wildlife on Doi Inthanon such as elephants, tigers, leopards, gorals and even rhinos. That was more than one hundred years ago.

The trail ends in the White Karen village Baan Man Klang Luang where a cup of coffee is waiting for you. The Karen grow coffee in the forest. There are several houses where they sell their own brands. The village has a primary school. The White Karen call themselves Pga-gan Yaw or S’gaw Karen.

The Pha Dok Siew Natural is a fantastic trail. This trail and the Kew Mae Pan Nature Trail complement each other. Kew Mae Pan has the stunning views, Pha Dok Siew has the thundering waterfalls. The way they have improved the trail,impressed me: they only used natural materials for the bridges, railings and stairs. The Pha Dok Siew Nature Trail features in Doi Inthanon day tours but doesn’t seem to attract the hordes that I encountered on the Kew Mae Pan Trail. During my hike in September I didn’t meet anyone else. In October we met several local tourists along the trail but it certainly wasn’t disturbing. The Pha Dok Siew Trail is open the whole year. The fee for the guide is 220THB if you are alone. With two people you pay 300THB (150THP per person).

There is a growing amount of accommodation in the village Baan Mae Klang Luang. Most of the bungalows are basic but decent and clean.

These are tours that include the Pha Dok Siew Nature Trail: